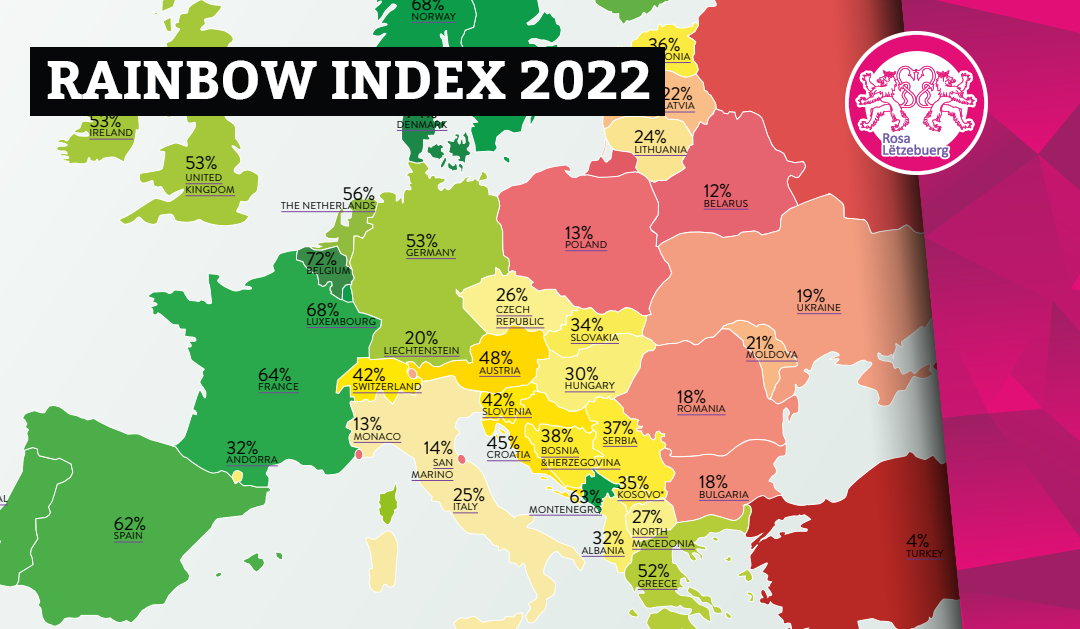 On the occasion of the upcoming IDAHOBIT, the International Day against Homophobia, Bisexuality, Inter- and Transphobia on 17 May, ILGA Europe has published the annual update of the RAINBOW MAP as well as the RAINBOW INDEX. This map, as well as the index on which it is based, presents very clearly the progress or regress of 49 European countries in terms of implementing demands to improve the legal situation of LGBTIQ+ people on a scale between 0% ( grave human rights violations, discrimination) and 100% (respect for human rights, full equality). Rosa Lëtzebuerg asbl has again been involved in the elaboration as the representative of Luxembourg.
While there was general stagnation in Europe last year, this year’s Rainbow Index is marked by a wave of progress in several countries. Leading the way is Denmark, which moved up a full 7 places in 2021 thanks to a large-scale strategy to close gaps in anti-discrimination legislation and has now landed in second place. This means a drop from 3rd to 5th place for Luxembourg (with 68% compared to 72% of the points in the previous year).
With no legal changes in favour of LGBTIQ+ people in Luxembourg already in 2020, this trend continued in 2021. Long overdue projects such as the bill to ban medical interventions on children without their informed consent, which the government still wanted to get through parliament by the end of 2021, continue to be a long time coming.
Other long-time demands of Rosa Lëtzebuerg asbl, such as the automatic recognition of parenthood regardless of the gender identity or sexual orientation of the parents or a ban on conversion therapies (attempts to physically or psychologically forcibly “heal” queer people) would also be urgent building sites that would be relatively easy to implement. A comprehensive legal implementation of the recognition of non-binary gender identities would also be a demand that Rosa Lëtzebuerg, together with ITGL, has repeatedly drawn attention to in recent years and which ILGA Europe has classified as a priority.

As already pointed out in October 2021, Rosa Lëtzebuerg asbl points out again that Luxembourg, with the current version of the proposed amendment, could cement the binary gender model in the Constitution in the long run. This means that we are in danger of the Constitution becoming obsolete even before it enters into force. This in light of the discussions on introducing further gender options in civil law.
Also, a too vague, general prohibition of discrimination instead of an explicit mention of, among others, sexual and affective orientation, gender identity and gender characteristics as motives of discrimination in the future constitution would mean a risk for LGBTIQ+ people. It is simply not acceptable that LGBTIQ+ people have to hope that future decision-makers and courts will interpret the general concept of discrimination as it was originally intended.

Under the title “Intersex bodily integrity”, ILGA Europe and its member organisations would like to draw the attention of governments to the protection of the human rights of intersex people. In addition to well-known demands, new ones are also mentioned, such as the creation of an effective monitoring mechanism with regard to the implementation of the ban on medical interventions on children without their informed consent.
However, after years of stalemate, there is also positive legislative movement in Greece, Latvia, Lithuania, Serbia, Slovakia and Slovenia, countering the narrative that there is an East-West divide in LGBTIQ+ rights in Europe. However, former frontrunners are also slipping, with the UK landing from 10th to 14th place.

The Rainbow Index indicates how much a government cares about the rights of LGBTIQ+ people. This has a direct impact on the reality of life for queer people in Luxembourg. Furthermore, the positioning also has an influence on the external perception of Luxembourg.
Rosa Lëtzebuerg asbl would therefore like to call on the government to become aware of Luxembourg’s role as a pioneer in human rights and to address the outstanding demands. Rosa Lëtzebuerg asbl also renews its offer to advise on the drafting of the texts.