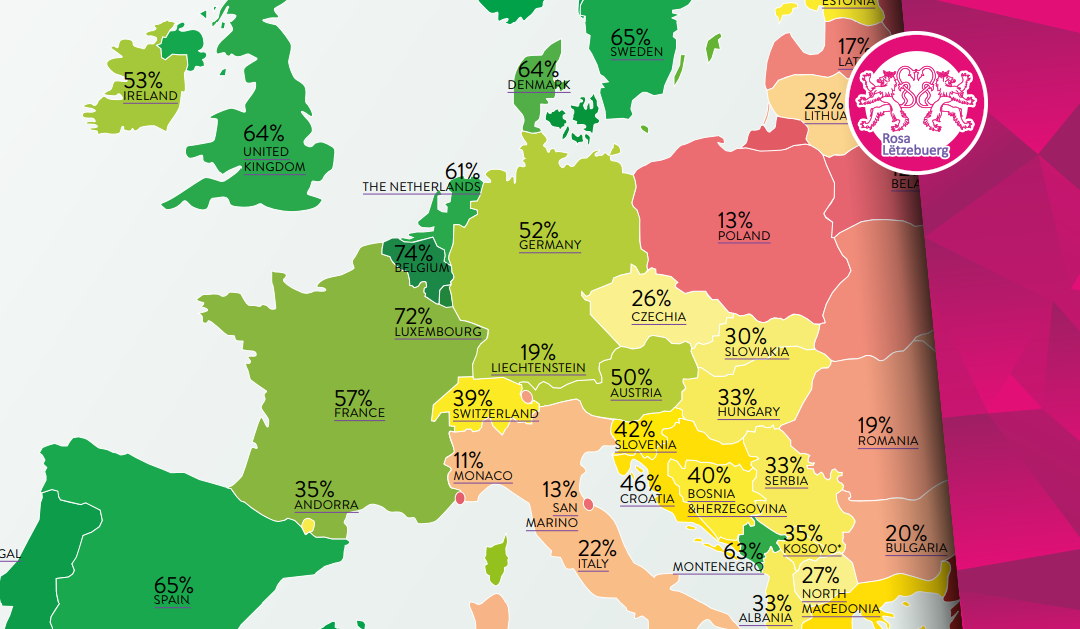 On IDAHOBIT: Luxembourg again in third place on the ILGA Europe Rainbow Map, but drops one percentage point to 72%. The Grand Duchy stagnates in the implementation of LGBTIQ rights measures.

Today, 17 May, the International Day against Homophobia, Bisexuality, Inter- and Transphobia – IDAHOBIT for short – traditionally sees the publication of the ILGA Europe Rainbow Map. This map, as well as the index on which it is based, presents very clearly the progress or regress of 49 European countries in terms of implementing demands to improve the legal situation of LGBTIQ people. Rosa Lëtzebuerg asbl is involved in collecting the data of this map every year as the national contact in Luxembourg.

What is striking is that there has been unprecedented stagnation over the past 12 months. Many countries have not moved at all. Among these countries is the Grand Duchy. But especially now, when an ever stronger conservative upswing is noticeable across Europe, it is more important than ever to set a good example.

Another construction site is currently the automatic recognition of co-parenthood in the case of same-sex parents. There has been a gap here for years, which was not remedied even with the adoption reform of 2015, and to this day confronts rainbow families with not inconsiderable obstacles. A ban on conversion therapies (the attempt to “cure” homosexuality, etc.) or an adjustment of the law on Hate Crime to protect intersex persons would be further issues that could easily be addressed.

Rosa Lëtzebuerg asbl, on the other hand, is dissatisfied with the current course of the Minister of Justice regarding a ban on anonymity for sperm donors in the context of artificial insemination. This approach tries to force rainbow families into heteronormative categories and thus does not take into account the actual realities of life in these families and also ignores the wishes of many donors. Moreover, this consequence would be a not insignificant reduction in the number of donations. Rosa Lëtzebuerg asbl advocates the middle way of a free choice.

LGBTIQ+ community after one year of pandemic

One year after the first lockdown and after more than twelve months of severe restrictions, a worrying conclusion can be drawn in retrospect for the local queer community.

After contacts with other people not belonging to one’s own household were impossible for many weeks and months, many younger and older members of the community were confronted with loneliness or even isolation. Places important to LGBTIQ+ people, so-called safe spaces, had to close, socio-educational centers either had to reduce their operations to a minimum or shut down completely. Queer culture took place, if at all, only to a particularly reduced extent.

In the last year, our organisation, which relies exclusively on the work of volunteers, has had to deal with an unprecedented amount of requests from affected members of our community. Offering support and referring people to professional services has at times stressed the limits of volunteerism.

As the end of the crisis is slowly approaching with the advancing vaccination campaign, Rosa Lëtzebuerg asbl is concerned about the state of the queer community in Luxembourg. Especially since some safe spaces have not survived the crisis, other ways must now be found to make queer culture and the facilitation of interactions possible.

In this context, Rosa Lëtzebuerg asbl is also trying to fulfil its role as a representative of the interests of the Luxembourgish LGBTIQ+ community and is working on various projects. One of these projects will be the Luxembourg Pride Week. This will take place, as planned, from 3 to 11 July 2021 and will include many of the already well-known events such as the memorial ceremony for victims of queerphobic violence, lectures or panel discussions. However, the popular highlight, the street festival, will be replaced by a Pride Show. Here, Rosa Lëtzebuerg asbl is working on a hybrid form where the programme will be livestreamed and where a live audience could be possible, strictly according to the security measures in place.

Rosa Lëtzebuerg asbl will communicate again in this regard in the coming weeks.